It was not long before Christmas, 3 years ago.   We had said goodbye to Mr. Bibs, out 16 year old cocker spaniel just a few months before.  The June before we had lost Coda, our 9 year old lab to cancer.  I said, “No more, no more dogs”  and I meant it.  I couldn’t handle the pain of losing them.
Carl’s mom lived with us then and she loved the dogs.  She was lost without them so I thought maybe I’d look at another…for her…not me, I wasn’t going to get attached.

I was interested in a mix, and maybe a King Charles/Poodle and researched kennels and low and behold, right here in Bancroft was Amy Dillabough.

We just went to look, but she did mention that she had retiree Spaniels and maybe we would be interested.  That sounded good to me.  Already trained, won’t have them that long, won’t have to get attached.

We went to see Malibu but another spaniel, Faith was right beside her all the time.  They were both so cute.  I was softening a bit.  Mom wanted them all.  Spaniels and the other breeds.  As I watched them I realized they were somehow related and found out they had been in the same kennel and were sisters.  I said to Carl, “you think she’d let us take them both, we’ve always had two dogs”  When I approached Amy she exclaimed, “you’ve just made my Christmas, I didn’t know how I was going to separate them, they’ve always been together”  That sealed the deal.

We got through Christmas and waited for them to be fixed and then they day came.. Faith and Malibu arrived…with Amy.   Boy they were nervous.  Pacing around here and there.  Amy and I sat on the floor.  I was ready with treats.   But they remained on high alert.  Then the time came for Amy to leave and they bolted.  Down the road they went but Amy got them back.

The first night they cried so I went down with them and lay in their bed.  They finally settled.  The second night I went to bed with them and was able to get up and their third night they were fairly calm.  It took a couple of weeks for them to completely settle but this was a new home…what did I expect.

From that day on they were almost perfect.  A few challenges.  This was a big move but there were three adults who just loved them.

They are the most loving dogs and I have to say I’m head over heals in love with them.  We make sure they stay in the best of health so we will have them a long time now.  They are 11 and 10 and still like puppies.  They  go everywhere with us.  Love to travel and when not able to take them they love their sitters, who spoil them too.

Lots of love from them and we pray for many more years. 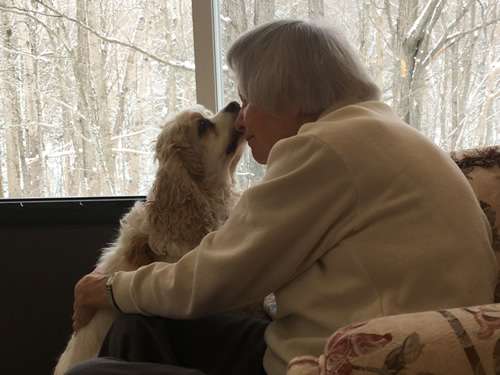 Thank you for trusting in me, I look forward to our journey together.